Once upon a time, a pair of nerds met on an internet roleplay forum. Diana said “Hey, I like you!”; Oz said “Hey, lets play!”. What followed were years’ worth of shenanigans including working together, living together, and waging war with kittens… and yet with a surprising lack of hot sex because they both married a couple of foxy dudes instead of each other. It’s cool though. They made a thing.

Silent Pines was born from many long, late nights of watching our favorite supernatural shows. We love the genre but we hate how often it stumbles into the pitfalls of frustrating stereotypes, disempowering or unhealthy messages for young readers/viewers, and cheap plot twists. Being the ASSHOLES that we are, we started writing our own supernatural stories. You know, with blackjack. And hookers.

At first it was just a satirical jab at the genre. But then, as we fell in love with our characters and grew increasingly ambitious in our transformation of tired old cliches, it turned into something more. Suddenly we had a world full of lore and three books in progress. Then nine. Then twelve. The first unedited manuscript was finished after three years. When people started reading it and LIKING IT, we realized the path forward was clear.

Two people who spent their whole lives dreaming of being authors looked at one another. They looked at what they’d made.

A magical man that likes butts! He rites gud and pretends that he doesn’t think fancy coffee is cool, but he’ll drink it anyway because Diana makes good coffee.

Oz is the mastermind of much of the supernatural lore and overarching plots woven throughout the series of Silent Pines. He keeps meticulous timelines because Diana can’t math, murders beloved characters, and does the majority of the editing work that goes into the finished drafts.

Diana likes to trick him into spilling plot secrets. 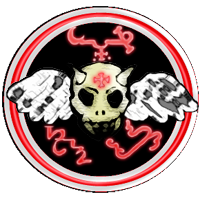 A real-life Disney princess who sings all day and has five cats. If you have trouble reading a sentence, it’s probably her fault. It’s okay if you laugh. She only dies a little inside.

Diana is responsible for most of the more mundane worldbuilding in the series; while Oz dreams up sordid histories and creepy monsters, Diana dreams up locations for teenagers to hang out and makes sure she knows the name of literally every teacher at Silent Pines High (not to mention their entire class schedules). Diana is an idea person and contributes the heart and soul (and actual knowledge of a public high school) to the stories.

Oz loves it when she accidentally makes magic.